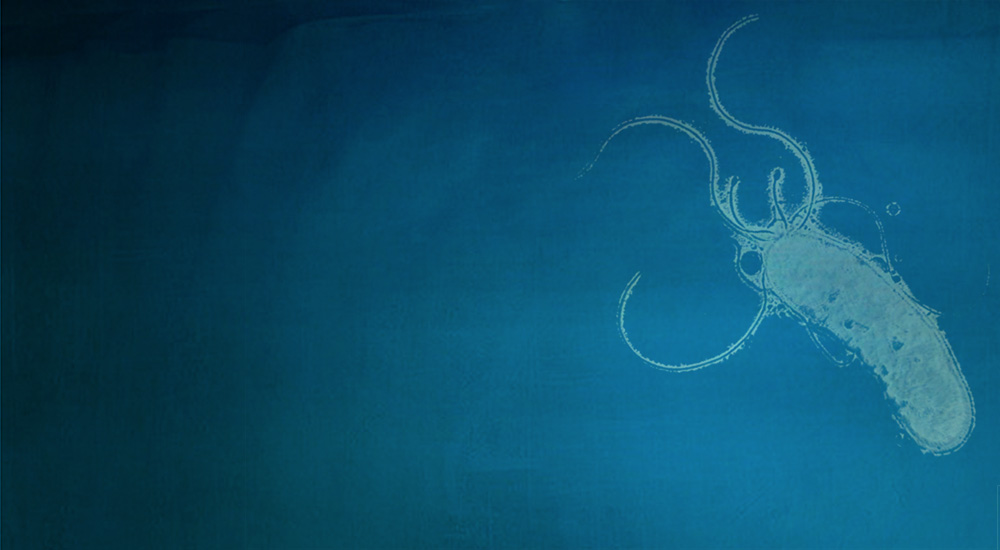 What lives in you and on you? It is a simple enough question. Yet, for most of history, it has been unanswerable. Finally, in just the last few years, we have begun to get a picture of the creatures on which you depend for existence, the creatures that constitute, literally, the majority of your cells, the creatures being dragged around as you cook breakfast, drive your car, shower or do anything else. Explore our Invisible life through the essays of science communicators who are curious about the most common species that call our bodies home.

Anton Von Leeuwenhoek was a strange little man. A bit of a hermit. He worked at odd jobs. In a drapery store. Administering wills. Then something magical happened to him; he began to work with glass, melting and shaping it, and found that he could make lenses. The order of what happened next is not entirely clear, but Anton saw a book of drawings of small things and it entranced him. And then he wondered whether there were small things all around him, small things he had never before seen. He wondered whether he was covered in life. He was.

Anton made his best glass lens and turned it into a microscope. It was not the first microscope in history, but it was the best. He then began to look. He looked with the fervor of a man who, having been blind his whole life, has suddenly gained vision. He looked in his neighbor’s mouth, at his own feces, at pepper grains, sewer water, dirt from the floor and anything else his small, white hands could gather or grab. When he did, he saw creatures.

Anton was not a scientist and so his searching might have led to nothing but then, imagine his good fortune, when he met a man in town who was part of the Royal Society of London, a scientist named Henry Oldenburg. The town was Delft, Holland, and the time was 1671, but already science had become worldly enough that the scientists of London and Delft talked. Oldenburg did Anton the kindness of sending a letter to the Royal Society, on Anton’s behalf, about what he had found.

The men of the Royal society grumbled and argued and searched and then admitted that none of them had ever seen anything so tiny as what young Anton reported seeing. They doubted him. Surely he was the crazy man of Delft, a man prone to seeing things. But he had been recommended by Oldenburg and Oldenburg was reputable and so the Royal Society, including the great Robert Hooke, the very man who had written the book of small things that so inspired Anton, began to try to repeat Anton’s methods and when they did they began to see the life he saw, not all of it but some of it and so they asked him to show them more. And so he did.

Anton spent the rest of his life turning his lenses toward the life around him. In doing so, he became the father of a dozen fields—microbiology, parasitology, protistology, and many more. His greatness was without compare and after he died no one would follow-up in any serious way on his work for more than a hundred years.

What really marked Anton was not the specifics of what he saw but the avidness with which he saw it, the joy with which he greeted the life around him, tiny life, unknown life, life of near infinite possibilities, a shimmering diversity of mystery in every swab of spit or emulsion of pepper. I bring the story of Anton up here because we are, right now, for the first time since Anton, in a time in which scientists are, joyously, using their tools to study the life around us. Dozens of scientists are now, like Anton, standing in their living rooms and kitchens awestruck by what they are seeing as they study their (and our) daily lives (even though they are not quite seeing it).

Unlike Anton, modern scientists study the small life forms around them by studying their genes. We can wipe a swab across your tongue to collect the cells of the tiny life forms living in your spit. By breaking open the cells, we can examine the genes of those creatures and within a few days even determine who exactly is living there. What we are finding is thousands of species on your body, even more thousands around the house and even more thousands in the backyard. Just 3000 species of bacteria are named and yet in a single study of just nine habitats in houses we found 8000 species, most of them without names. I will not very boldly speculate that there are more unnamed species of microbes in a single house than there are named species in the world.

What is exciting about this new phase of discovery is that it is not just being carried out a lonely draper in Holland. It is being carried out by scientists around the world, scientists inspired by Leeuwenhoek to look with wonder at our daily lives. In this book, we sought to compile stories of some of the most common species in your body, on your body or otherwise around you, species moving across you right now whether you know it or not. These are our letters, but rather than sending them to the Royal Society, we are sending them to you, to everyone, so that we might all share in the wonder of our ordinary lives.

Author of The Wild Life of Our Bodies