Back to project home

In late 2012, we published our first scientific research paper, based on the results from the first 60 belly buttons we analyzed:

In this paper, we revealed that belly buttons are indeed a jungle of microbial diversity, having detected over 2300 species in those 60 navels! Just eight of those species – we called them oligarchs – were frequent and abundant across the individuals sampled (they were present in more than 70% of people); the remaining species were quite rare, often appearing in just a single navel. 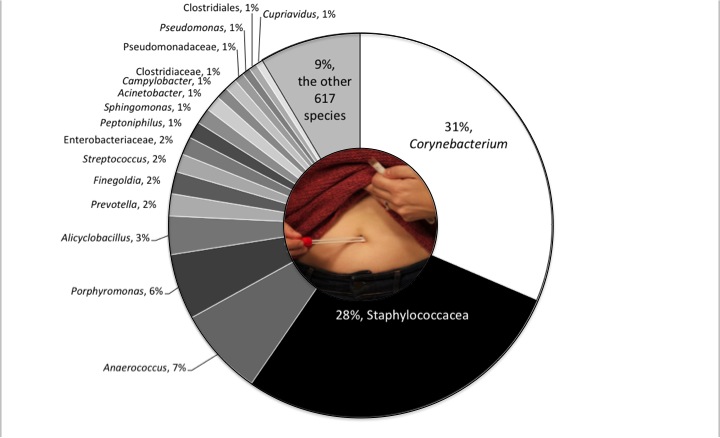 The relative abundance of different microbial “species” (technically operational taxonomic units, OTUs) across all the belly buttons sampled. Each pie wedge represents a single species, with the size of the wedge a function of the total abundance of that species (total number of reads). Species can have many occurrences either by being present on many people or being represented by many individuals when present. In practice, the most abundant species in belly buttons are all both found on many people and abundant on those individuals.

We investigated factors like age, sex, ethnicity, innie vs outie, and frequency of washing – yet none of the factors explained differences in the number and kinds of bacteria we found in a particular person.

So we turned it back to our citizen scientists and asked them to share hypotheses and new factors that deserve further probing. Visit the Explore page to dive in and take a look at the data yourself.

Description: Taxonomic data matrix (sheet 1) and meta-data matrix with participant-reported information and derived environmental factors (sheet 2). 153 participants are represented in this data set (same participants as in Interactive Chart 1), including 60 individuals whose data were included in Hulcr et al 2012.